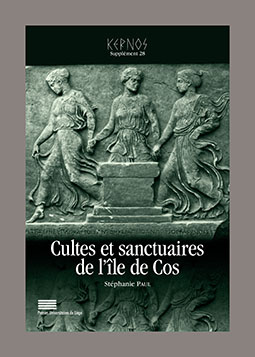 In 366 BC , the different communities on the island of Kos, in the Southern Sporades, come together through synoichism in one city, located now on the northeastern tip of the island, in a strategically and economically more advantageous location, off the coast of Caria. This change has profoundly influenced the religious landscape of the island, resulting in the reorganization and reconfiguration of its pantheon and religious behaviours. Through a careful blend between new religions and ancestral traditions, this reform gave a recently formed community the possibility to reach the cohesion of a shared religious identity. Registrations on epigraphs of several provisions of worship and the important building activity in the sanctuaries continued in Kos until at least the first century BC , attesting the vitality of coan religion during the Hellenistic period. The abundance of documentary texts makes Kos an ideal place to study the religious practices of the ancient Greeks and to interpret their polytheism at the local level, illustrating the richness, complexity and dynamics of a regional pantheon.