Exhibition: “Works and days. Archaeology of production and trade in the ancient Akragas “ 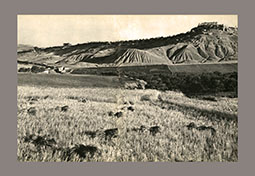 ” … There were exceptional vineyards for dimensions and beauty, and most of the region was planted with olive trees, from which they drew so much product to sell it even at Carthage. Because, in fact, Libya was uncultivated, the farmers of the land of Akragas traded with Libya and gained enormous wealth” (Diodorus Siculus, Historical Library XIII , 81)

On December 19th, 2013 at 17:00 in Agrigento, at Villa Genuardi (Via Ugo La Malfa) , the exhibition “Works and Days . Archaeology of production and trade in the ancient Akragas” will be open; the event is part of the Museum School Project 2012-2013 and is organized by the Soprintendenza BB.CC.AA. in collaboration with MIUR, USR Sicilia, Ufficio X. Ambito provincia di Agrigento. Text and images tell the story of the ancient Akragas over the centuries, a prosperous city, for the fertility of its lands and wealth of the subsoil, and enterprising, because of the vitality of its port, as documented by the finds coming from the area of the ancient Emporion.