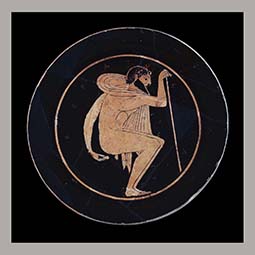 From two excavation pits in the lower part of the Agorà of Aiolian Cyme (Izmir, Turkey) an undisturbed late 8th – half of 7th century B.C. stratigraphy was recovered. During the excavation, a small group of disks (few centimeters diameters large), made of both pottery and stone, were found. Similar disks occur at several Mediterranean archaeological sites and were manufactured starting from prehistoric periods. These objects were largely produced during the Geometric and the Archaic period, as mostly attested at Athens. Abundant archaeological literature, mainly in English, considers these disks as pawns for board games (pessoi according to ancient Greek writers). The Greek literature provides also many examples of game activities related to these artifacts and, in some cases, we know the main game rules. The very simple shape and making of the small disks suggest that they could have been reused in other functions, as suggested by literary and iconographic documentation.