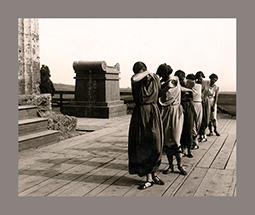 The paper discusses the theme of festivals in the sanctuaries of Magna Graecia through the analysis of some sample cases, particularly relevant for the convergence of data from both written and archaeological sources, including the iconographical ones related to votive terracottas. Between “lucky” contexts, such as the Heraion of Lakinion in Kroton, and others still much debated, such as the feasts celebrated in Taranto at the tomb of Hyakinthos, the importance of the festive moment emerges as a key element in the colonial religion, which the archaeological documentation can help to reconstruct even in its most tangible aspects.