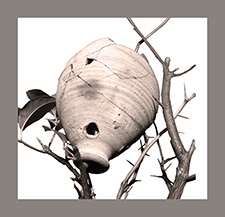 The object of the analysis presented in this paper is a series of perforated ceramic vessels from the archaeological excavation of a room located in via Caprera, Cagliari, southern Sardinia (Italy), dated to the first half of the 1st century AD. Its aim is to demonstrate their possible use as ollae perforatae, perforated vessels used in arboriculture and horticulture to create a garden in the ancient city of Caralis, one of the most relevant vehicles of the Romanisation process between the late Republican and early Imperial age.