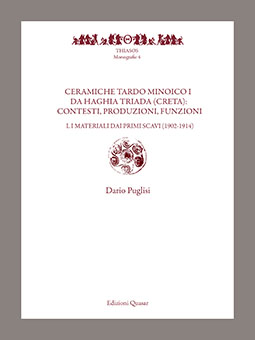 D. Puglisi, Late Minoan I pottery from Haghia Triada: the assemblages and the system of production and consumption.

This book by D. Puglisi, member of the Italian Archaeological School in 2000-2002 and of the Italian Archaeological Mission at Haghia Triada and Phaistos since 1996, aims to gather in one volume all the published and unpub­lished Late Minoan I pottery from the first excavations at Haghia Triada (1902-1914) and to update, according to the more recent research trends, the old edition by L. Banti. The volume is divided into three parts. In the first part, the archival documents (in particular the notebooks and sketches of the first excavators, Federico Halbherr, Enrico Stefani and Roberto Paribeni) are used to reconstruct the pot­tery assemblages as retrieved in the old excavations. The nature of the evidence, which mostly consists of whole vases kept in the well preserved LM IB architectural contexts of the Villa Reale, is especially suited to the application of a synchronic perspective and to the investigation of the system of produc­tion and consumption of pottery in the site. This investigation, which is carried out in the second and third parts of the book, has largely been neglected in studies on LM I pottery, mostly because of the prevailing interest in chronology and the definition of relative sequences. Regionalism, in particular, has been frequently mentioned but never ana­lyzed in a systematic way. Starting from the evidence from Haghia Triada, more than 50 shapes and 30 motifs are discussed in the second part of the book, with an emphasis on their morphological and stylis­tic features and on their distribution on a local, regional or insular level of consumption. Final­ly, these features are classified in four groups on the basis of their geographical distribution and are examined in order to highlight the dynamics governing their spatial distribu­tion and the inferences that can be drawn for the system of pottery produc­tion. In the third part, a new approach to investigating the system of pottery consumption is proposed. It de­rives from an adaptation of the model elaborated by A. Rapoport for analysing the cultural use (that is to say the consumption) of space. A fundamental point in Rapoport’s approach is that there is not a univocal correspondence between human behaviour and the built environment, but rather a complex interaction between systems of activities and systems of settings. In the same way, vases are not used in isolation, only according to their morphological features, but are part of a system of types that is consumed in connection with systems of activities. Following this perspective, the author proposes to distinguish the pottery shapes from the first excavations into six “functional groups” according to their morphological features and their connection with systems of activities: 1) tableware; 2) small containers for valuable contents; 3-4) storage sets of medium and large dimensions; 5) shapes involved in production/transformation processes; 6) shapes connected to ritual practices. Furthermore, a comparison is carried out between the typological composition of pottery sets recovered in the Villa and in some houses of the Villaggio excavated in the second cycle of excavations (1977-2012) in order to investigate pottery consumption in different social contexts.

To purchase the book: Quasar