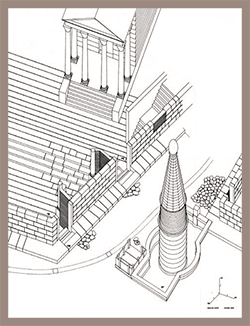 Between 2002 and 2003 in the excavation site of the University of Rome “La Sapienza” in front of the Colosseum, near the Arch of Constantine,an extraordinary discovery was carried out. Just below the fountain of the Flavian age, known as Meta Sudans, the remains of a similar monument has been identified: a fountain of the Augustan age, very similar to the Flavian one, but smaller. Besides the remains in situ several blocks in Luni marble were also recovered, belonging to the architectural decoration of the salient. These elements have enabled the hypothesis of reconstruction of the monument, which is presented here.