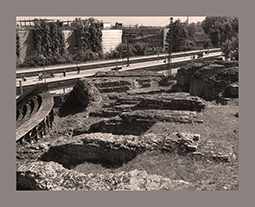 The probably largest Roman theater north of the Alps was located in Roman Mogontiacum (today‘s Mainz). Already in the late 19th and early 20th century, the site was partially excavated, documented and destroyed. Recent research was initiated in the late 1990s and resulted in the partial excavation of the monument. Despite the new field research and the importance of the building in Antiquity, the theater has been given relatively little attention in modern research discussions, or has sometimes been discussed under incorrect assumptions, based on the obsolete state of research. The present paper focuses on the typological comparison with other theaters in the region (primarily the province of Germania superior). The theater of Mainz was outstanding in various ways, based on architectural ornamentation influenced by Mediterranean models, its type, size and its very early construction date. The particular role of the theater is mainly due to its presumed function in the context of the memorial events for Nero Claudius Drusus, political gatherings and the presence of the Roman army.