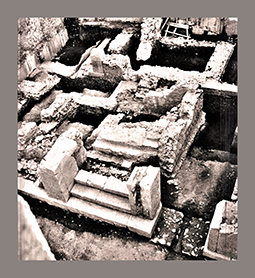 The double sphendone stadium of Patras, from the Domitian age, is one of the most representative monuments of the city. The eastern substructures, articulated in a series of vaulted rooms, functional both to support the steps of the cavea and to consolidate the natural slope, is the most preserved sector of the building. The structures are built according to local construction traditions: moreover, they have the peculiar characteristics of Roman architecture in Greece such as, for example, the use of solid brick vaults. The analysis of the remains made it possible to highlight the traces of the construction site, such as those of centrings and scaffolding, and to reconstruct the building process of the monument.