Vol. 7 | Bronze vessels from the Acropolis. Style and decoration in Athenian production between the sixth and fifth centuries BC 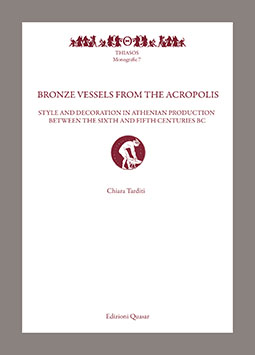 C. Tarditi, Bronze vessels from the Acropolis. Style and decoration in Athenian production between the sixth and fifth centuries BC, Thiasos Monografie 7, Roma 2016, pp. 410

Few years ago, when I was still Director of the National Archaeological Museum, I granted Ms Chiara Tarditi permission to study and eventually publish the bronze vases from the Acropolis of Athens, not only those exhibited in the Museum but also those in storage.

It was thus a great joy to see the manuscript of a full book entitled Bronze Vessels from the Acropolis. Style and Decoration in Athenian Production between the Sixth and Fifth Centuries BC. I was impressed by the systematic way the author dealt with a material which at first sight seems “unimpressive” since it mainly consists of fragments. Starting from epigraphic and literary testimony and subsequently examining technical and stylistic matters, Ms Tarditi manages to present an integral picture of ancient Athenian metalwork as well as its position among the workshops of other cities during the Archaic and Classical periods. The conclusion that Attic works were diffused in sanctuaries other than the Acropolis, such as those of Olympia, Dodona and Perachora, and also in more distant areas like Italy and the Black Sea, albeit on a smaller scale, betrays Ms Tarditi’s methodical, exhaustive and in-depth research.

I am indeed greatly pleased to see material from the National Museum published in such a thorough study, the result of the author’s hard and painstaking work. I believe that its contribution in the field of Attic but also of ancient Greek metalwork in general is great and I sincerely wish that the author, whom I now consider as an expert in the field, will present us with other similar works in the future.

Download the .pdf with table of contents and introduction: Bronze vessels from the Acropolis

To purchase the volume: Quasar