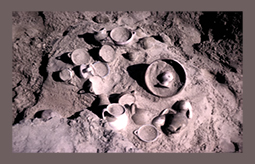 In 1967 it was brought to light in the demetriac sanctuary of Bitalemi at Gela a significant deposit comprising 24 vessels, apparently left in place randomly. Under the pottery they were kept two stones reddened by fire and some bones of a pig. The discovery, known only by preliminary records, is still often quoted as a one of the clearest examples of ritual deposition of the remains of a banquet. On the occasion of the final publication of the excavation and findings of the archaic level of attendance of the sanctuary, it is proposed here an accurate reading of the deposit, which aims to define its date and significance in the overall context of the excavation. Taking a cue from this unique discovery will be lead some observations related to the way of carrying out ritual meals in the sanctuary, considering the identity and the possible number of participants, as well as food consumption attested by the banquet itself, particularly in relation to the worship paid in sacred area