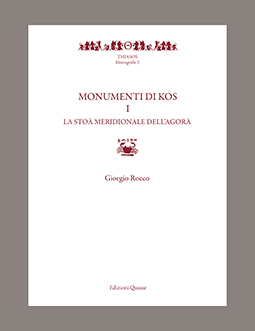 Published in the context of the recently launched “Thiasos, journal of archaeology and ancient architecture”, the monograph inaugurates, being its first volume, a series of works dedicated to the architecture of Kos and other Dodecanese islands, that is going to include the edition of the Gymnasium and Central Baths by Monica Livadiotti. The volume is published in e-book form, but a translation in English, edited by Rita Sassu, is under preparation and will be shortly available in printed edition (always with Quasar publisher).

The study of the South Stoa of the agora is part of a more general analysis concerning the topography of the ancient city of Kos that the team of the Department of Sciences of Civil Engineering and Architecture at the Polytechnic University of Bari, directed by Giorgio Rocco, has been carrying out for many years, in collaboration with colleagues of the Ephorates of Dodecanese and the Archaeological Institute of Aegean Studies of Rhodes.

The hypothesis of reconstruction of the Stoa results from a research paying special attention to data coming from the survey of structures as well as architectural fragments and turns out to be a relevant element for the overall knowledge of the agora of Kos and its monuments, a topic the author dealt with in several contributions during the last few years. The very existence of this long porch defining the south side of the agora also solved a number of questions regarding the topographical configuration of the city’s central area, that remained unanswered since Luigi Morricone’s  excavation in the westernmost sector of the Hellenistic plateia and Charis Kanzia’s archaeological investigations in its eastern extension.

In addition, the description of the consistency of the monument and its reconstruction are complemented by a comprehensive system of comparisons with the coeval micro-Asiatic architecture, hence contributing to the understanding of the architectural production of the island in the Hellenistic age, giving it a greater importance than has hitherto been supposed.

The volume is then completed by the Catalogue of Architectural Fragments of South Stoa (edited by F. Liuni and A. Ferrante), by the Catalogue of Structural Stratigraphic Units (edited by M. Livadiotti and M. Messina) and by two brief studies, in Appendix, the first one regarding an unusual system of vertical fixing (A. Fino) and the second one about a particular lifting system that connects Kos’ architectural production to the “Ionian Renaissance” of the Hellenistic Asia Minor (M. Livadiotti).

The illustrative apparatus, entirely original, has been realized with the contribution of undergraduate, graduate and PhD students of DICAR of Bari, who, since 2004 participated in missions in Kos, which is gradually assuming the role of  “school yard” for future Italian “Bauforscher“.

Download the. Pdf with table of contents and introduction: South Stoa, preview